We’ve been hard at work the past few months figuring out how to add differential signal stages to Signal Chain Explorer.  An example of a signal chain using differential signals is given above.  Here, we have a microphone or acoustic pickup signal being sent to a phase-splitter transformer stage, which converts the signal into a differential pair — the signals being 180 degrees out of phase to one another, but with (hopefully) equal amplitudes. This signal pair is then sent to a differential form of a low pass filter,  and then passed to an amplifier stage which strips away the common mode voltage part of the signal and amplifies only the differential voltage, converting said signal back to single-ended form, and subsequently passing the signal on to some type of load (a speaker, an audio recorder, an A/D converter, etc.)

Why go to all the bother of using differential signals? One key reason: If the signal pairs are transmitted over a twisted pair cable, perhaps with further coaxial-type shielding, any interference infringing on the cable tends to be automatically canceled out in the differential signals, greatly reducing the impact of said interference on the final signal quality. Likewise, any electromagnetic noise generated by the signals themselves and radiating out to the surrounding environment is also greatly reduced.

Signal Chain Explorer is all about maintaining signal quality, and quantifying said quality in the form of the Signal-to-Noise ratio and Effective Number of Bits. Utilizing differential signaling can be a key to achieving high precision, and because of this, we’ve really wanted to add the ability to simulate differential circuits in SCE.  The math behind differential signal stages is more complex  than it is for single-ended stages (ie., the kind of stages SCE currently supports), and it has taken a bit of effort to figure out how to implement this math robustly and efficiently.

There’s a ton of detail work still left to do, but most of the hard issues have been solved, so we’re pretty sure we’ll be incorporating this functionality into SCE. As a preview, here’s an example of a more abstract form of a signal chain that SCE will be able to handle: 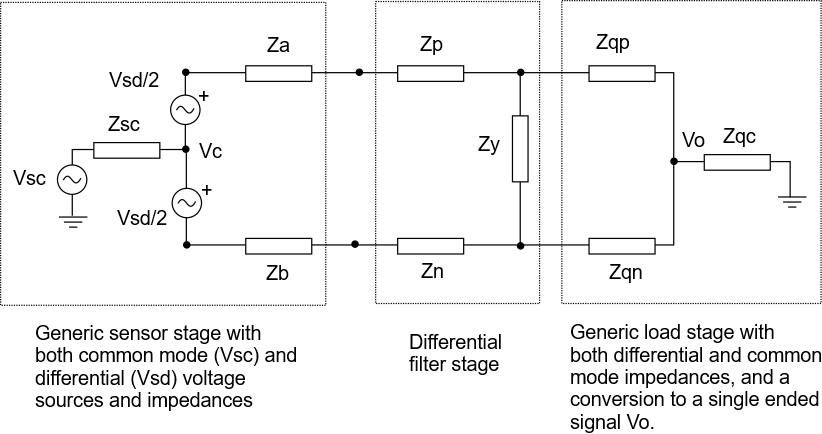 In this circuit all the impedances are abstract, being frequency-dependent complex variables. You’ll be able to use any passive, two-port network in place of these impedances, just like you can already do in the single-ended stages of SCE. And, of course, we plan on having a library of more concrete stages, including specific forms of differential sensors. For example, antenna sensors, bridge sensors, and so forth. And we’ll have an assortment of low-pass, high-pass filters, transformers, and various forms of loads, such as the common-mode stripper circuit shown earlier, and LC-Baluns used for narrow-band impedance matching.

One key feature we’ll be incorporating: Ordinarily in differential stages you want to keep the impedances on the two signal lines the same, in what is called a “balanced” condition. That’s key to getting good noise canceling. However, we’ll be using a more general form for the differential stages that allows you to upset this balance, on purpose. Why would you want to do that? To see what effect such imbalances have on your signal chain. It’ll be a great learning tool.

One other key feature: As we do for single-ended stages, we’ll be keeping track of thermal noise, thermal distortion, and interference coupling into the stages. These features are the hard part, and will be the main value added.

So stay tuned! And drop us a line so we know who’s interested in this, and what sorts of problems you’d like to see addressed.